The Big Bear Valley, a mountain resort area in Southern California, is making progress toward a community consciousness that honors Mother Earth.  In the Fall of 2004, a year after devastating wildfires caused the evacuation of the entire mountaintop, a group of local residents met Eastern Shoshone elder Bennie “Blue Thunder” LeBeau.  Blue Thunder has a unique and extensive understanding of the energy systems of the earth, and how to prepare ceremonies designed to repair the damage done to Mother Earth’s energy grid by development.  These residents decided to enlist Blue Thunder’s assistance to end the six-year long drought.  The story of the 2004 Big Bear Medicine Wheel Ceremony and the Reharmonization Ceremony of 2005 can be viewed below in a documentary film.

At the same time the residents approached Blue Thunder, the Valley’s civic leaders had another plan to bring water to the mountain – cloud seeding.  A total of nearly one-half million dollars had been pledged by various agencies over a three-year period to seed the clouds with silver oxide.  Again, the residents went into action.  Joe Bradley, a high school Physics teacher, led the research of the environmental and health risks of silver oxide.  The results of his findings eventually led to a requirement for an Environmental Impact Study before the cloud seeding could continue.

Before the Big Bear Medicine Wheel Ceremony (November 20 2004), Big Bear Lake was down 17.5 feet from full.  By the end of January, the lake had gained over 10 feet and was virtually full by summer.  Meteorologists and network weathermen were baffled by the fall and winter seasons’ unprecedented precipitation.  Within the community of Big Bear, a growing number of people attributed Mother Earth’s blessings of water to the ceremonies that honored Her.  While civic leaders did not acknowledge the Medicine Wheel Ceremony, they did agree that there was no need to pursue the EIS for future cloud seeding. 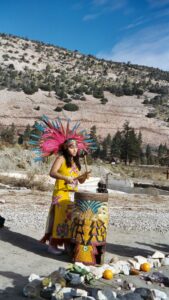 In 2005, the Lake William area of Big Bear was having low water pressure in its aquifer.  DWP sought grant money to build a pipeline from the neighboring community of Erwin Lake.  Fortunately, funding was not received.  I knew that Blue Thunder was in California and I asked him to come and assess the situation.  When we arrived in Lake William, hawks circled around us in the sky.  Blue Thunder explained that the aquifers could be pressurized by creating a Medicine Wheel around the valley with the spokes being ten high peaks.  Much of this work was accessed by horseback and several members of the Search and Rescue team participated in these ceremonies.  After the ten peaks were readied, Danza Azteca Xochipilli joined us for the final “Reharmonization Ceremony” on the Winter Solstice at the sacred site of Pan Hot Springs.

The aquifers were definitely pressurized, as two people told me they had to halt construction on their new homes due to an abundance of ground water, and one resident reported his well had gone artesian!  No pipeline has been pursued.

Since the initial Big Bear Medicine Wheel Ceremony, a grassroots movement of earth healing ceremonies, drumming circles, and environmentally conscious organizations has been accelerated in the Valley.  Dr. Robin Bradley founded EarthHEAL (Human and Earth Alliance for Life).  Blue Thunder, later known as Bavado Rainbow Thunderheart, has returned to Big Bear many more times to assist in the healing of this land.

Sadly, our dear brother “graduated” to The Other Side on June 12, 2016. He continues to join us in our ceremonies. 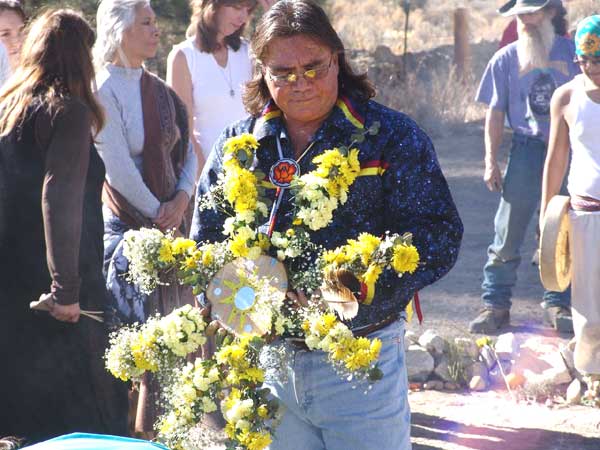